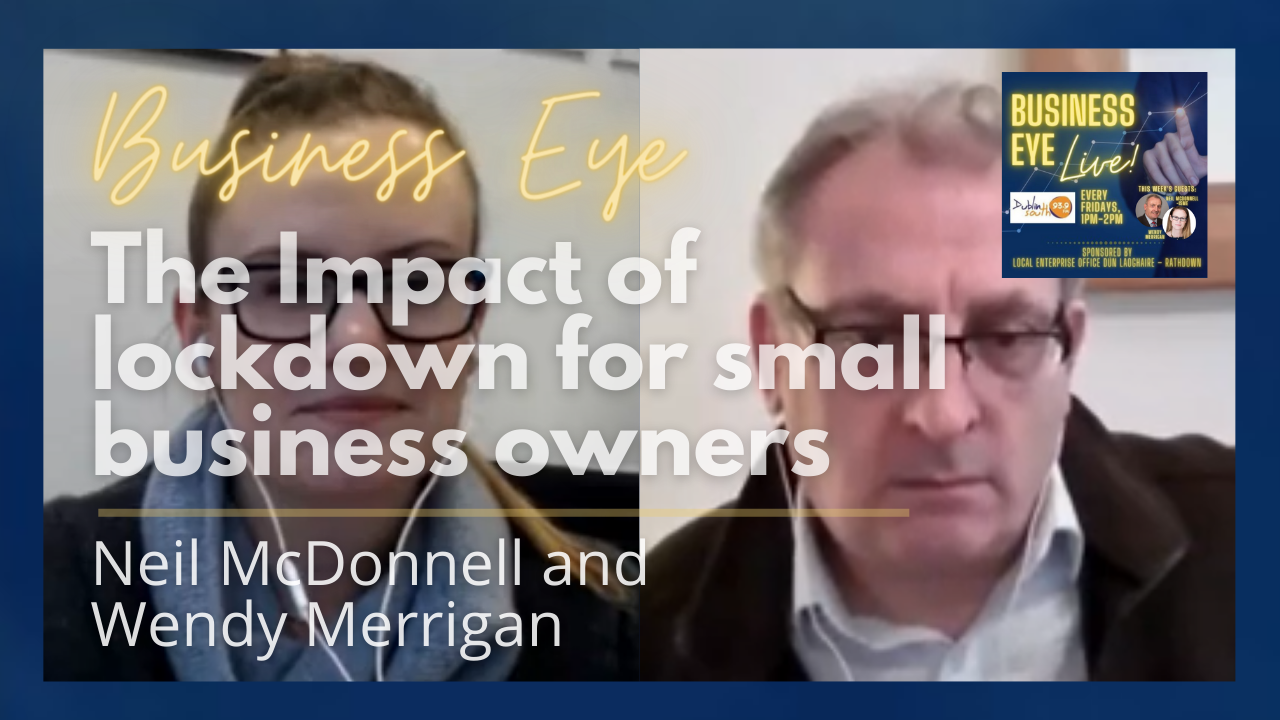 This week on Business Eye

Neil joined ISME as Chief Executive in 2016. ISME, Neil has been especially active on the issues of insurance costs for small business, the introduction of a perjury act to tackle white-collar crime, and the need for a comprehensive reform of Irish indigenous industrial policy.

Wendy Merrigan, Chartered Accountant with a practice in Dublin.

Wendy share her knowledge to enable bossiness to understand a little more about the financial aspect of their business, with a view to becoming financially free during the course of their lives

Extra Research for you to consider:

Around two-in-five micro-sized firms and one-in-two small and medium-sized firms faced a revenue shortfall in the main COVID-19 lockdown period from March to June 2020. The total shortfall across SMEs over this period is estimated to be between €6bn and €10bn.

If firms’ own cash resources bridge the gap then between €2.2 billion and €4.3 billion remains unaccounted for.

Scenario estimates for the total revenue shortfall for SMEs for the full year could amount to between €8bn and €15bn, depending on the epidemiological situation.

Who are the biggest winners out of lockdown

The export-driven, multinational tech and pharmaceutical sectors are the biggest winners

Despite having the third-largest consumption fall across 23 European countries, Ireland’s GDP decline was the sixth smallest, mainly due to robust export growth.

Based on 2019 data, 26 per cent of Ireland’s exports are computer services, a further 15 per cent are goods for processing, 11 per cent are medical and pharmaceutical goods and 7 per cent are organic chemicals.

Outside of the tech and pharmaceutical industry, the following sectors also prospered – the percentages are actual growth against that predicted for no pandemic:

Supermarkets + 7% .Growth due to the sector remaining open throughout lockdown.

Hardware, Paints & Glass +9%. The sector benefitted by the early re-opening in mid May and sales have exceeded estimated sales with no pandemic.

What has been the overall death rate year on year over the last 5 years in Ireland?

*This figure represents recorded deaths for the period January to October. During this period, Covid 19 accounted for 1,462 deaths or just over 6.5% of total deaths during this period. Q4 figures yet to be published

Covid-19 was the fourth most common underlying cause of death identified in the CSO’s analysis of registered deaths up to the end of October.

Another factor contributing to the poor youth mental health observed in this study is their lower tolerance of uncertainty. Young people have experienced a greater proportion of their lives trying to live with the virus.

– One in 10 are seeking help with their mental wellbeing

– Estimated cost of returning employees to work is €37,138

– 3,450 women and 589 children contacted a domestic violence service for the first time.

– On average 1,970 women and 411 children received support from a domestic violence service every month.

– On average 191 women and 288 children were in domestic violence accommodation each month.

Initial data from the National Self-Harm Registry indicates a 25% fall in the number of people attending hospitals because of self-harm in April, with the National Suicide Research Foundation adding that preliminary data also indicates no rise in suicides.

Speaking during a webinar organised by the NSRF, Dr Paul Corcoran presented data which he said showed no evidence of an increase in hospital presentations of self-harm in March or April — the period of initial lockdown due to Covid-19 — and that attendances fell by 25% in April, mainly due to fewer attendances by women and young people.

However, the early data indicates that at least for the onset of the pandemic, there was no spike in either suicides or self-harm, albeit the reduction in presentations was in the context of a significant fall in overall presentations to hospitals — there was a 30% drop in the number of total presentations in March and a 40% drop in April.

What stats are available on the flu outbreak in 2017/2018 from the UK and Ireland?

Also can you see a loosening of lockdown in the USA now that JB is in power?

President Biden has re-imposed travel bans on most non US citizens who have been in the UK, Brazil, Ireland and most of Europe in his attempts to bring Covid under control and effectively reversing the relaxing of an order that Trump imposed in his final days in office.

He has tightened the wearing of face masks and ordered quarantine for people flying into the US.

Biden’s priority is to act quickly on measures to control the pandemic and spur economic recovery. He will introduce a $1.9 trillion ‘American Rescue Plan’ which will consist of $1 trillion in direct aid to Americans and $440 billion in aid to businesses.

Biden does not support a national lockdown but said he would listen to the scientists. His plan is to ‘shut down the virus’ not the economy.

Catch all our shows on

OR every Friday on Dublin South FM at 1pm

By continuing to use the site, you agree to the use of cookies. more information